Posted by Physicians Alliance of Connecticut on August 4, 2022 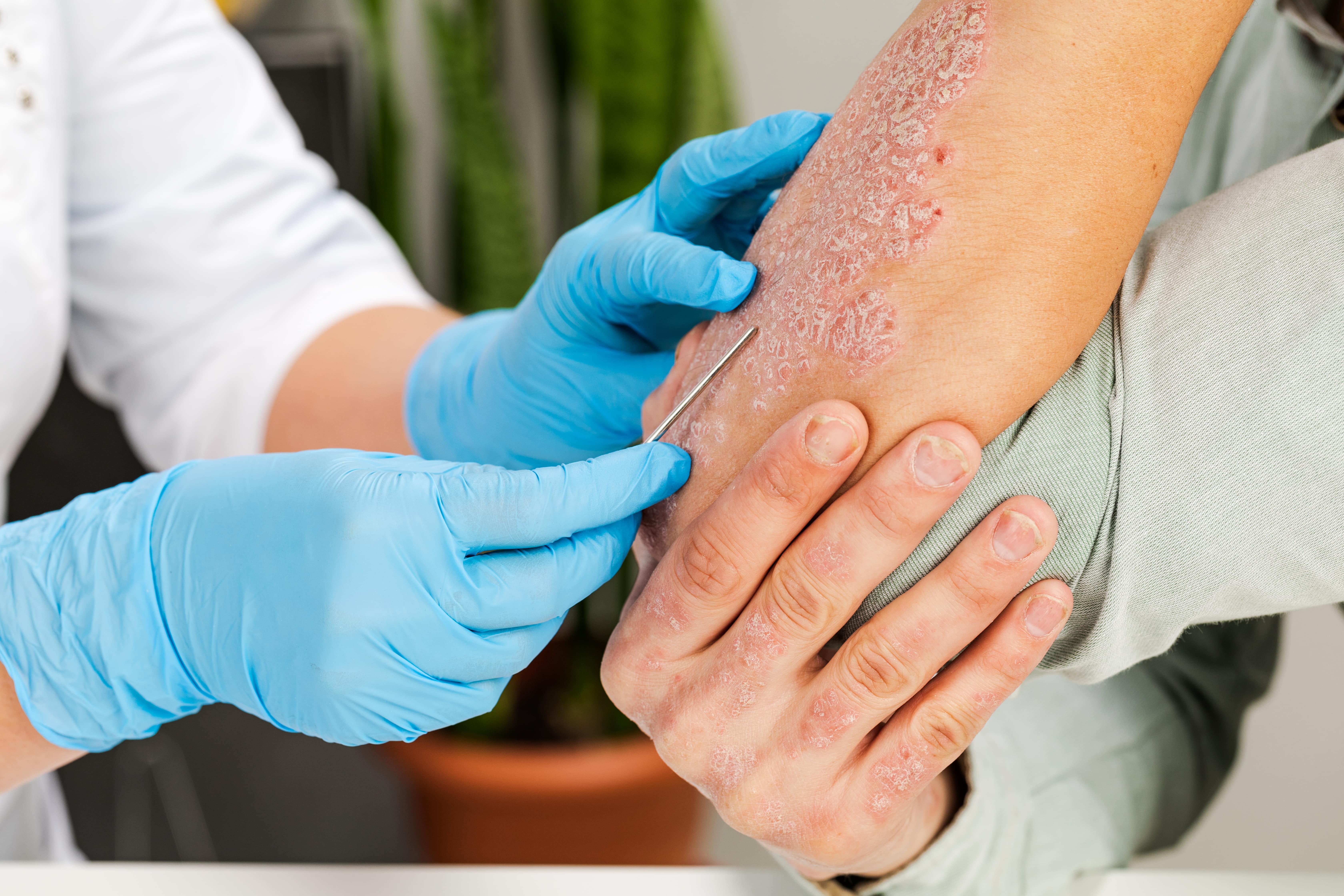 You’ve tried it all – creams, ointments and other over-the-counter products to treat your itchy, red, patchy skin, but nothing will do the trick. If this sounds familiar, you may be dealing with something more than just irritated skin. You may have a condition called eczema or psoriasis. Although eczema and psoriasis share symptoms, they are two distinct conditions.

If you or a loved one have developed a skin condition with similar symptoms, it’s important to know the difference between eczema and psoriasis and get treatment. Here is how to tell them apart.

Eczema is an inflammatory skin condition that causes dry skin, itchiness, rashes, blisters, and scaly patches. The exact cause of eczema remains unknown, but it is thought to be a combination of genetic factors, environmental triggers, and issues with the immune system.

There are seven different types of eczema. It is possible to have more than one type of eczema at the same time, and each type has its own triggers and treatments.

• Dyshidrotic eczema causes small, itchy blisters on the edges of the fingers and toes, palms of hands, and soles of feet. It is most common in people who have another type of eczema and usually runs in families.

• Neurodermatitis is characterized by intense itching and scratching. It is usually confined to one or two patches of skin.

• Nummular eczema is characterized by circular patches of skin that are often itchy and may sometimes ooze liquid.

• Seborrheic dermatitis is a chronic form of eczema that appears in areas where there are a lot of oil-producing glands, such as the nose, scalp, and upper back.

• Stasis dermatitis occurs when there is poor circulation in the lower legs. This allows blood cells and water to pool in the feet or lower legs and can cause ankle swelling, discoloration, and dryness.

Psoriasis is a skin disease that causes a rash with itchy and scaly patches that usually appear on the elbows, knees, scalp, and trunk. It can also appear in areas that are scratched frequently, or in the folds of the skin, such as under the breasts or around the genitals. Similar to eczema, the exact cause of psoriasis isn’t known. But, what is known is that the immune system and genetics are major contributing factors.

There are five main types of psoriasis, and it is possible for someone to have more than one type at the same time. The symptoms may also change over time.

• Plaque psoriasis is the most common type of psoriasis and affects up to 80% of people with psoriasis. Plaques can appear anywhere on the body as raised patches of inflamed or itchy skin with scales.

• Erythrodermic psoriasis can cause intense redness and shedding of large layers of skin sheets. It can affect most of the body and can potentially be life-threatening. It is rare and affects about 2% of people with psoriasis.

• Guttate psoriasis is characterized by small red spots with blood vessels on the surface of the skin. It often appears on the arms, legs, and torso. It affects about 8% percent of people with psoriasis.

• Pustular psoriasis causes pustules that may be surrounded by inflamed or reddened skin. It may appear on the hands and feet or cover most of the body. It affects about 3% of people with psoriasis.

What are the Similarities Between Eczema and Psoriasis?

As you can see, without the consult of a knowledgeable medical provider, it may be difficult to form a distinction between the different types of eczema and psoriasis; although they are different conditions, eczema and psoriasis share many similarities in their symptoms. First, it’s important to note that neither condition is contagious. You cannot catch eczema or psoriasis from someone who has it. However, both conditions can lead to infections.

Eczema and psoriasis can cause a rash, and the rashes may appear in the same places on the body, like the hands and scalp. Other symptoms may also include discolored skin and itching or burning sensations. Eczema and psoriasis are also both believed to be caused, at least partially, by an overactive immune system that mistakenly attacks the body.

What is the Difference Between Eczema and Psoriasis?

Eczema is usually the result of coming into contact with an irritant, like detergent, soap, or heavily fragranced lotions. Allergens such as dander or dust can also trigger eczema. Changes in the weather, illnesses like the common cold, and stress can make eczema worse. Eczema is also very common in infants and children. The symptoms usually improve in adulthood, although it is possible to get it as an adult.

Psoriasis is an autoimmune disease, so it occurs when the immune system malfunctions and causes skin cells to grow too fast. This causes the cells to pile up on top of the skin and form a white scale. Psoriasis rarely shows up in babies and usually develops between the ages of 15 and 25.

There is also a subtle difference in the intensity of the itching in eczema and psoriasis. With psoriasis, there may be no itch, or it may be mild to moderate. With eczema, the itch can be intense and severe and can affect sleep.

Although there is no cure for either eczema or psoriasis, the symptoms can be managed. A treatment plan may consist of a combination of medicine, developing a good skin care regimen, and avoiding triggers. If you have symptoms of eczema or psoriasis, a PACT dermatologist can help you determine which condition you have and develop a treatment plan that meets your needs. Find a provider and schedule an appointment today.